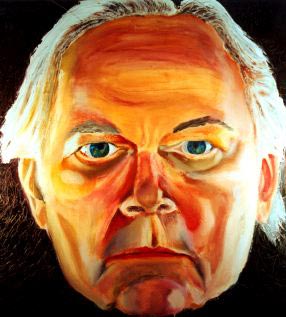 I started painting when I turned 60. For the last 15 years, since retiring as the associate editor of The Berkshire Eagle, it’s been a full time love affair with paint.

AN EXCHANGE WITH SOL LEWITT

Jan. 23 – March 31,  2011. Massachusetts Museum of Contemporary Art, North Adams, MA. A group show in which my entry is a sculpture of Sol LeWitt with glasses.

SCARLET LETTER WALL
2007, Welles Gallery of the Lenox Library, Lenox, MA. The wall, 6’x31′ feet, was composed of 104 paintings. The show was supported by the Sue A. and Robert H. Gersky Foundation. As part of the show Juliane Hiam Scribner, in conjunction with Grier Horner, staged an evening of drama, song and art called A is for Adultery. It was held Aug. 5 before a full house and raised more than $1,000 for the library.