The Art of Eroding Memories 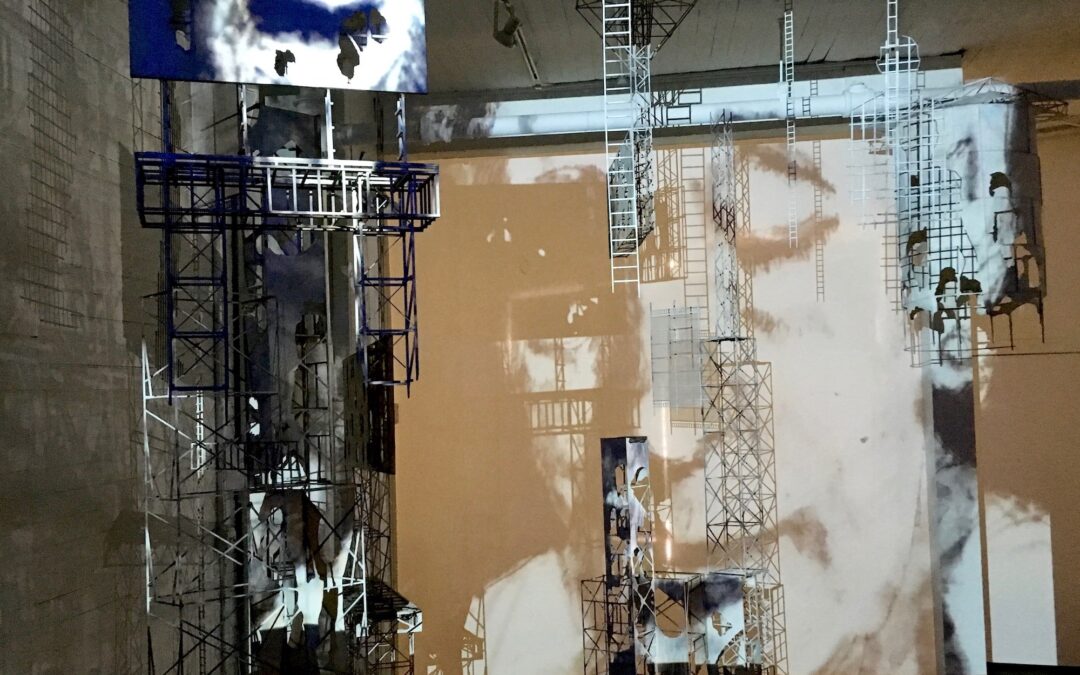 Here’s the portrait I didn’t see in my first visit to Installation Space in North Adams. Photo by Grier Horner.

So I sat down on one of the bean bag chairs in the viewing space where two projectors play videos on one long wall and a screen rigged up to split the rather narrow gallery in two. In the room itself, skeletal buildings and scaffolding rise from the floor and hang from the ceiling. The projector not only plays images on the two viewing surfacers but casts shadows on them. In the three-minute video loop, the projected images change quickly.

My first time at Installation Space I didn’t even take in the fact that portraits kept making brief appearances. It was only when I processed the shots from my iPhone that  the face in the photo at the top of this post jumped out at me. I thought I had made an amazing discovery and was anxious to tell Anna Farrington. But then as I read Maloney’s description of what he was doing and an article about his work in Boston Voyager Magazine last year I realized this wasn’t some secret imagry Maloney had slipped into the video for this show called Building Memory.

“The portraits are drawings/paintings that I’ve done of movies that somehow revolve around memory (Memento, Nostalghia, the Mirror etc),” Moloney said in an email.  “The one from the picture you sent (the one at the top of this post) I believe is the mother in the film Wild Strawberries.” 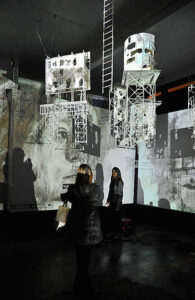 Here’s a shot by Paul Marotta for Getty Images of a 2015 forerunner of the current show. It was part of the outdoor Illuminus art festival in Boston in 2015. The scale there was much bigger – about 30 feet high. Let me show you a couple more. This time they’re  my shots. 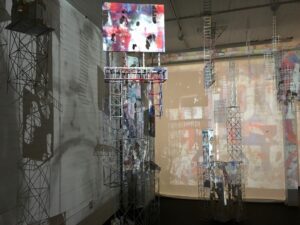 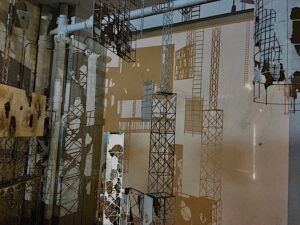 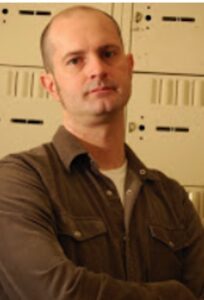 Maloney lives in Jamaica Plain just outside Boston and teaches illustration at MassArt. He is fascinated with the urban landscape and the human memory. Both are vulnerable to the “passing of time and the wear and tear of daily usage” which “takes its toll on our environment and the way we process and recall information.” He says he uses the scaffolds, ladders and constructions as a “framework for fragmented thoughts and ideas.”

“The scaffolding is made from slivers of wood,” Maloney said in an email. “They’re all cast-off’s from cutting notches for joints in cabinets from a cabinet maker friend.”

In an interview with John Seven in The Eagle on September 1, Maloney, a dyslectic, said this installation has been a creative way to  explore his difficulties with memory.

Some of his work on this project was done at MASS MoCA in 2016 when he was an artist in residence for two weeks. 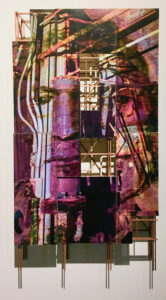 Above is a portrait of one of the founders of the Arnold Print Works, the first factory that occupied the Sprague Electric plant that has been converted into MASS MoCA.  Using a projector, Maloney played his portrait on the mill’s old boiler plant, took a photo of that and then built a framework to support it. Amazing!

“Yes, image projections are a visually stunning media!” he said in response to a comment I had made. 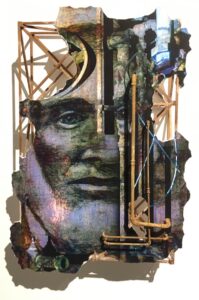 Here’s another of Maloney’s Arnold owners.

Taken as a whole, the installation is complex and powerful and, for me, transfixing.