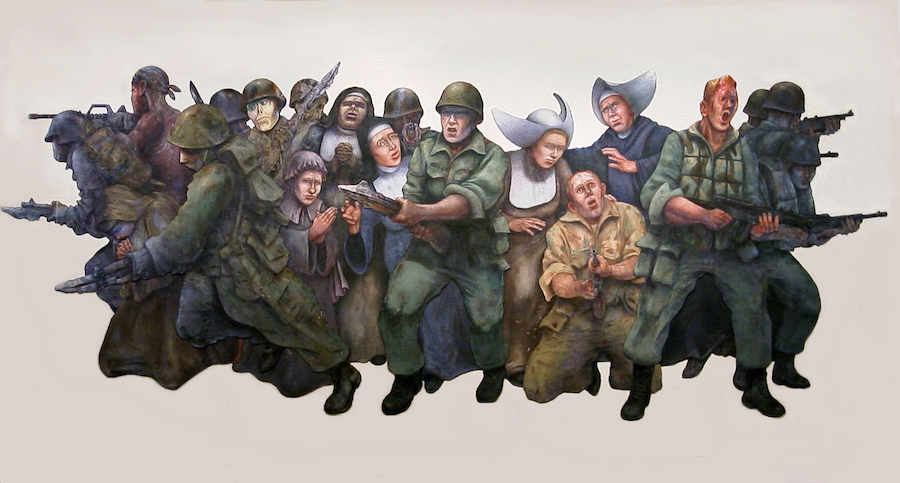 This painting by Jim Allen, heroic in scale and steeped in one of philosophy’s conundrums, packs a knockout punch at the Berkshire Museum of Art in North Adams.

Called “Not Just Another Pretty Picture,” the exhibit was put together by Eric Rudd , the artist-entrepreneur who bought the church and transformed it into a showplace for his and other artists’ work. The  stone church is located across from the monument at the end of Main Street in North Adams.It  can be viewed Saturdays and Sundays from noon to 5 through October 13.

Allen’s painting is 15 feet long and it’s named “Nuns ‘n Guns,” In it Allen wrestles with the eternal question of whether it is right or wrong to kill in the name of a supposedly good cause.

“I’ve always been perplexed by the fact people haven’t figured out how not to go to war,” says Allen, a retired art professor. As a newly minted 2nd lieutenant when he graduated from Notre Dame in 1964. It wasn’t long until Lyndon Johnson started escalating the war in Vietnam. Allen figures he missed being sent there by about a month. 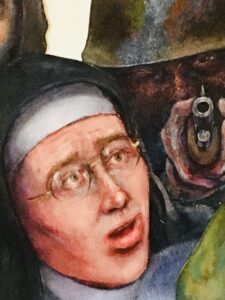 This is a detail from the large picture. The nun reminds the artist of his fifth-grade teacher. I like the way Allen shows the eye of the soldier taking aim behind her. Photos by Grier Horner unless otherwise noted.

The painting was a husband and wife effort. After Allen drew the figures and cut them out, Kristin Allen went to work on them with her sewing machine, stitching the edges of each figure, and piecing figures together until she finally had two sections. Then the stitching in the center was covered up by attaching the charging soldier at the painting’s center.

“She figured out how we could do them,” Allen says of his wife, who he says is terrific on both the computer and the sewing machine. That partnership has made a number of his paintings possible. Once she had completed piecing the project together, he stapled the work to a wall and started painting.

Painting the piece – I call it a masterpiece – took 500 hours, he estimates. He did it in 2002 during a one-year sabbatical from his post as an art professor at Daemen College in Amherst, N.Y. For years he had been grappling with the “dichotomy…the strark differences between war and peace” and now he was going to put it on canvas. But the schism between what he had learned in 12 years of Catholic education and sanctioned taking of life during war were not, of course, resolved in the painting. 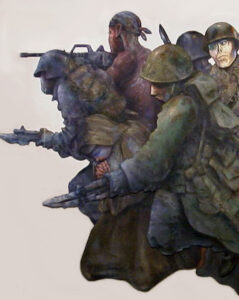 This detail from the left end of the painting is powerful in its action, subtle in its coloring and the depiction of the praying nun seen here falling as she is caught in the soldiers’ charge. Another expression of Allen’s despair about war is the face of the soldier below He is in the far right of the painting. 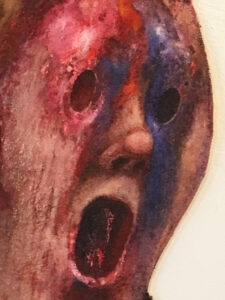 Among his other cutout paintings on display are these: 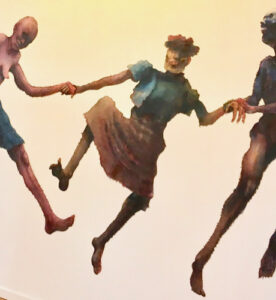 Here we have the nightmarish “Totentanz,” the title of a Franz Liszt orchestral piece. In English totentanz means Dance of the Dead. It is one in Allen’s series I Am Poor, I Am Hungry. He painted it in acrylic in 1992. It uis 142 inches wide. 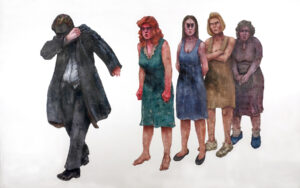 And this 2019 acrylic is Me Too, with its predator and his angry accusers.Photo by Jim Allen. It is almost 100 inches wide. 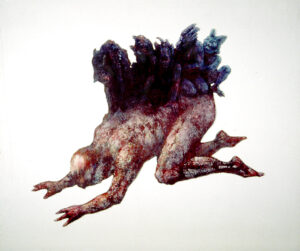 And now comes St. Anthony Tormented by demons on his back. This photo is by Jim Allen, Below is a closeup of the last beast. 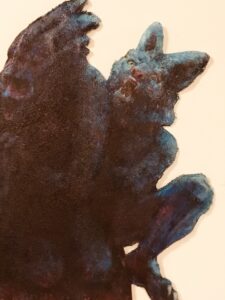 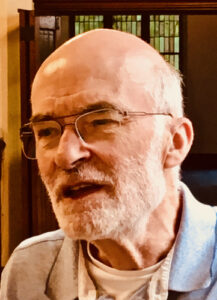 The exhibit includes a number of other artists, some of them very good. Here is a photo I liked by Dan Fox, illustrating the fact that there are other riches to discover at Rudd’s impressive museum. 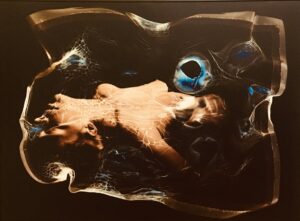