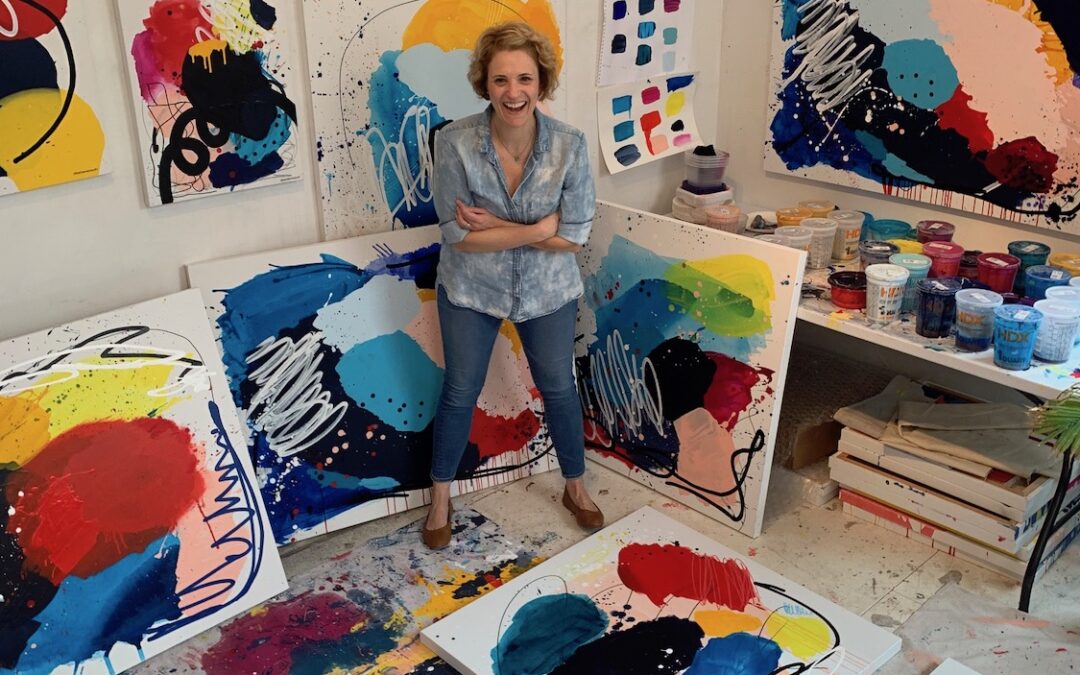 Jesse Tobin McCauley in her studio in the Lichtenstein Center in Pittsfield. Photo by Noel Henebury

For Jesse Tobin McCauley her current show at the Lichtenstein Center for the Arts in Pittsfield is a sentimental journey. Just six years ago she had showed with Group W at an exibit at the Lichtenstein. Although he lived near Pheonix, her father, FX Tobin, whose work was wild and woolley and often X-rated, was the spiritual leader of this “industrial strength” art tribe. The other members were her uncles,Jay and Bill Tobin, along with Mike Melle and Mark Hanford. The next year her father died unexpectedly at 73.

While both father and daughter painted, Jesse’s work is abstract and his was figurative. But they share a boldness  in their approach to art.

Her show is called “Happy.” It’s easy to see one of the things that makes her happy when 4-year-old Kane comes running through the gallery. He stops to tell us what he’s up to. He opens the bathroom door to show us how he can wash his hands and reach up to pull the paper towels out of their dispenser. Then he’s  off again at warp speed, a high-energy bundle of personality. 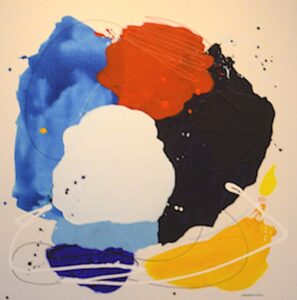 Like Jackson Pollack, Jesse lays her canvas or paper on the floor, working on five or six at a time, ala Noel Henebury’s wonderful shot of her in her studio – which is in the Lichtenstein. 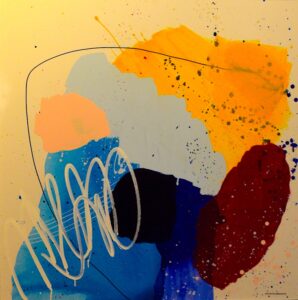 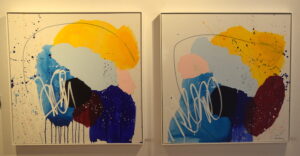 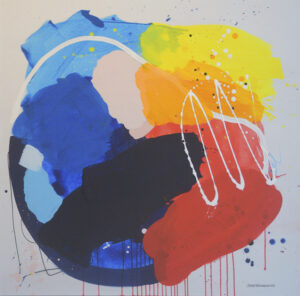 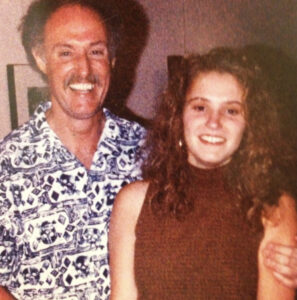 “I’m not as X-rated as my Dad,” she says. In fact her work iis strictly PG. She starts with charcoal or pencil to draw in some shapes, picks out a color scheme and builds up the colors with a half-dozen layers. I guess there must be 50 paintings in the show and they are all related in color and soul. Some are hung   in groups of two, three and four paintings across. And the ones in these groupings are kissing cousins The paintings in a group usually have the same names plus a number like Zing 1 and Zing 2, etc. And the names echo the type of noise words Roy Lichtenstein often painted on his pop-art canvases: Pow, Zing, Blamo, etc.

Jesse, 45, is a graduate of Taconic High here and studied graphic art and photography at Otis College Art and Design in Los Angeles. She stayed in LA for 8 years and worked 8 more in Brooklyn. Then in 2006 she returned home and took care of her mom who had Alzheimer’s. Despite her illness Mrs. Tobin retained her sense of humor and so did Jesse who captured the humorous highlights of their life together in a lively blog. Jesse, who is married to Joseph McCauley, is the creative director at Main Street Hospitality, which operates the Red Lion Inn, the Porches and  Hotel on North among others.

The show’s title is right on.  Collectively these paintings are a pure expression of joy and a maturing talent.

You can see the show on Wednesdays, Thursdays and Fridays from 10 to 4 and on Saturdays from 11 to 1, when Jesse herself will be holding down the fort.

I had included three more photos of Jesse Tobin McCauley’s photos here. But whenever I used them they made it impossible to publish this post. I tried everything I could think of to include them but after a few hours I gave up. I had jinxed them somehow 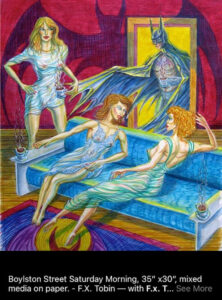 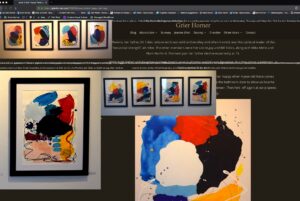 Untill I eliminated the errant photos, this is what you would get when you went to my blog. The shots causing the trouble were both groupings of four and the photo in the lower left.

Use The Divi Builder
Add Form