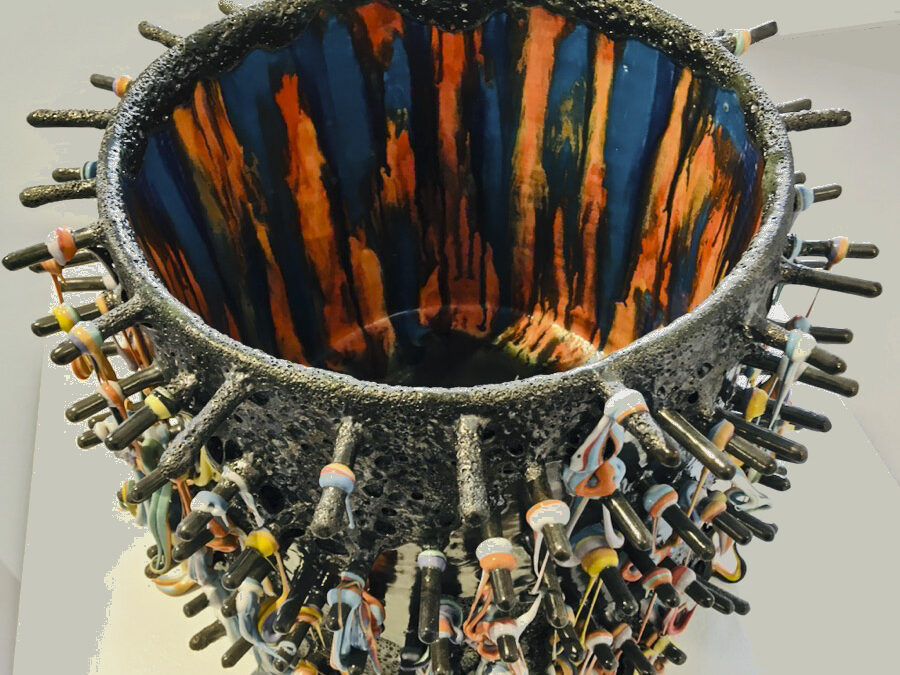 This amazing, prickly vessel is by Lauren Mabry who currently has a solo show at Ferrin Contemporary at MASS MoCA.

When I read Jennifer Huberdeau’s review – “A rising star in the ceramics world” – in The Eagle Sunday morning,  it was so much better than the piece I was planning on the same  artist, Lauren Mabry of Philadelphia. that I might as well just go back to bed. Huberdeau had quotes from the artist, the gallery owner, an art critic and she put it all together beautifully. I had no quotes. I’d gone to Sunday’s opening, But did I take notes. Of course not.

“Maybe Ms. Mabry will. join us,” I told the ref. “Unless she’s exhausted from racking up all that yardage.”

She must have heard me because she walked over. Not sauntering like she was full of herself. Just walking.

“I could use a beer,” she said. “Me and my fiance.” (She’s getting married later this month I had learned from Ms. Heberdeau’s piece .)

“Do you know how good you are, Lauren?” I asked her as the group, including the ref, headed to the bar. “Is it OK if I call you Lauren?”

“You’re one of the best broken field runners I’ve  seen,” I said. She smiled even though she probably hears that all the time. “You’re a fine broken-field runner in art too. Those things you made. The ones over at the Ferrin Contemporary. They’re very fine and you had to find your way through the field to do them.”

By this time we had all crowded into the bar a friend calls The Bucket of Blood. Man did that Guinness taste good after all that defeat.

“No contest,” I said. “The one in this picture.” I pulled out my phone and showed the one at the top of this post..

“That’s one of my favorites, too,” she said.

“The thing I like best,” I said,  “is that fiery interior.” Then I hastened to add that I liked the blackish exterior with all the pegs sticking out and the colorful things hung on the pegs.”

It turns out that those loopy things hanging over most of the pegs are made of the glaze, the element used to color the object that’s been made, not to be a free-standing element of its own. And using the glaze that way has created what appears to be a new directiion in the world of ceramics.

The opening of Mabry’s show Fused was held Sunday at Ferrin Contemporary, a gallery at the MASS MoCA complex in North Adams.  The gallery will be open from 11 to 5 Thursdays through Saturdays for this show. It’s end point is a little vague at this point: “until we switch to summer hours.”

From talking with Leslie Ferrin, it is obvious that she thinks Mabry has potential star power in the ceramics universe, which Ferrin focuses on. 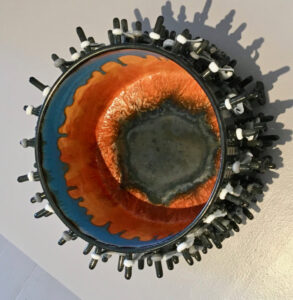 Here’s another of her vessels, this one shot from the top to expose it’s glorious inside.

If This Post Looks Different, That’s Because It Is

This is a new format for my blog. It was designed by Marita Carol of The Design Department. She was the one who created my original blog in 2006. I used to post a bog every other day. But in the last year or so it’s been more like one every other month. That wasn’t just me falling apart but my blog softwear, Contribute 6.5, becoming so obsolete using it was often impossible. So she switched me to WordPress and saved my huge file of old posts in the process.

I hope to use the blog as a means of selling my paintings and photographs. It’s the paintings that are weighing heavily on my mind because I’m playing the end game. I just have a lot of them and most of them are big.

I don’t want to give each of my three kids 150 paintings each. That would be unfairly shifting the burden from me to them.

I also used to write more about life. Now it’s mostly about art. Life will make appearances. And I hope to inject some humor into the writing occasionally.

This is Lauren Mabry working at the Clay Studio in Philadelphia, where she won a residency. Photo from her website: http://laurenmabry.com

Originally from Madison, Wisconsin, Lauren Mabry lives and works in Philadelphia, Pennsylvania. Her ceramic work is internationally known for its bold, expressive glazes and is represented in permanent collections at The Nelson-Atkins Museum of Art, The Daum Museum of Contemporary Art, The Nerman Museum of Contemporary and, and the Sheldon Museum of Art. She is the recipient of individual grants from The Pew Center for Arts & Heritage, The Independence Foundation, and the NCECA Emerging Artist Award. Over recent years she has shown in many institutions such as Mindy Solomon Gallery, The Bemis Center for Contemporary Art, and the Milwaukee Art Museum. She has worked at the Jingdezhen International Studio in China and the Gaya Ceramic Art Center in Bali, Indonesia. She received her BFA from Kansas City Art Institute in 2007 and her MFA from the University of Nebraska-Lincoln in 2012. Mabry is currently teaching Material Science at Tyler School of Art.

Mabry on What She Does

I make painterly, abstract, ceramic art. I’m a calculated risk-taker with a keen attraction to color, movement, and material. The transformative properties of clay and glaze drive my ongoing compulsion to make, play, and experiment with surface. I’m instinctively allured by the sumptuous qualities of glaze and it has quickly become the focus of my work.

If an Apology is Needed

I want you to know that I’m a big admirer of Lauren Mabry’s work. I hope you didn’t take my crazed thematic scheme of reviewing it as a football game as an insult to Mabry’s art. It was part of my effort to make my posts more interesting. Let me know what you think.